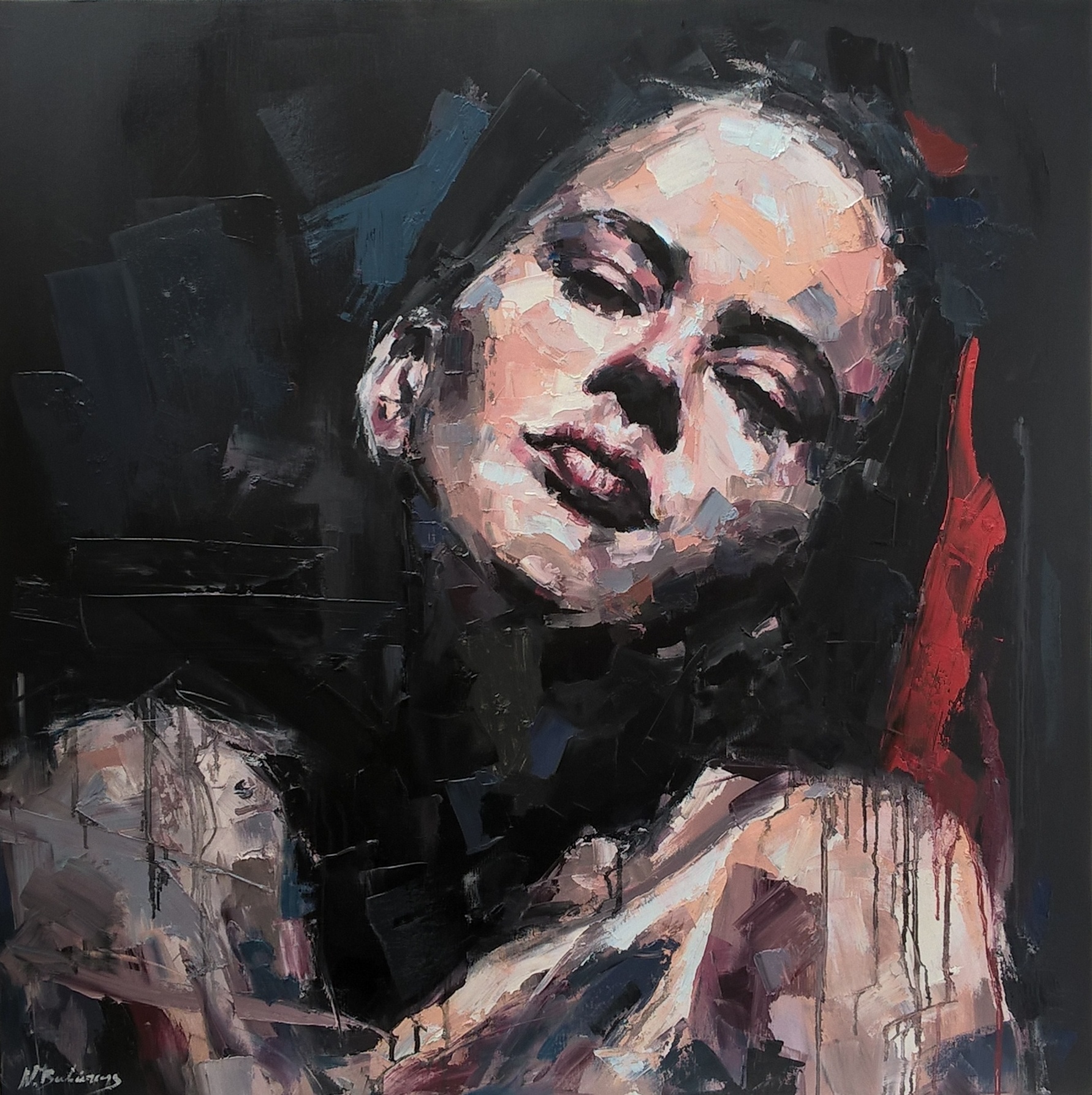 «I have got an inner world
that I was ignorant of.
Now, everything goes inside.
I do not know what happens there»

Nikos Vavatsis` portraits behave like a mirror. At first sight they look like distorting the human face, as its characteristics «are buried» under overlapping, persistent and broad brushstrokes, which deconstruct this magic function composing the singularity of each face. In many works, actually, it is almost difficult to decipher the subject at first look, that is the face. The approach is so subtractive, making it look like distortion, like warping of the figure, which is the original material used to recognize the painted face.

But, under the coats the brush leaves, something can be deciphered. Something seems to be saved from the artist’s «aggressiveness». The eyes in one face, the nose or the mouth in another, are the signs allowing the observer to realize that the work is nothing else but a face, a singular face. Under one condition of course:  taking distance from the painting. For observing the painting from very close, you can recognize the artist’s technique, which means distorting the face in order to unveil, but it «kills» the painting, for the observer cannot comprehend the image. The distance, on the contrary, allows that glance which not only comprehends the human figure, but- mainly-realizes the creator’s intention.

When the original figure of a face is not genuinely depicted, what is left from that face? How can its singularity be conceivable? How can it be separated from the other faces? Here the artist chooses those parts of the face that permit to function like gateways opening a way inwards, into the inner world of the being, into that region where practically the singularity of each human being dwells. The region of the feelings. Indeed, the dissolution of the outlines of the face, makes it easier to enter inwards, because the glance is not diffused, but it concentrates and that’s why it can penetrate.

The fragments of the faces portrayed on the canvas bear- despite their fragmentation- a whole: a complete, meaningful feeling or an emotional situation, no matter which this situation is. The determination, the expectation, the sorrow, the disappointment, the sense of defeat, the fear, a latent joy hesitating to relieve, is what finally the observer can see, and in fact you could say that you not only see them, but you are seized by them, you are submerging in them. And here it is that something extraordinary happens. The singularity of each human being meets the universality of the feelings and the painting functions not as a distorting mirror from now on, but as a mirror of the meaning of the human being. Which- being finite- dissolves like a shadow, but it first leaves its own trace, singular and universal at the same time. And this series of paintings seems to eloquently impress what Arthur Rimbaud wrote:
« the real life is absent, we are not in the world »

Nikos Vavatsis` portraits behave like a mirror. At first sight they look like distorting the human face, as its characteristics «are buried» under overlapping...